It's not just a hobby; it's a way of life. a way of sustaining life, anyway.

How long have I been baking? uh...as long as i can remember? my mom isn't a huge baker in the '50s homemaker kind of way, but i remember helping her make things as a kid. Once i went to college and had my own kitchen, i usually only let there be cookies in the house if i made them myself. i figured if i put effort into it, i deserved to eat it! recently I have started making recipes that are more healthy--less butter and oil mostly, and wheat flour or bran when appropriate. I started trying to experiment and create my own original baked goods this weekend! results vary.

Why? well, it's fun! as mentioned previously, i like to create things. and there's no better outcome of a creation than eating it! i like to share with friends too. especially experimental things...

Let see some pictures! Okay, if you insist.

Pear pie i made in January 2009: my first pastry crust from scratch! 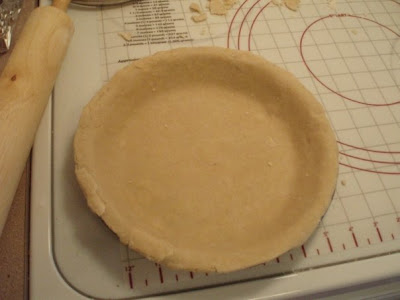 never stays together of course. 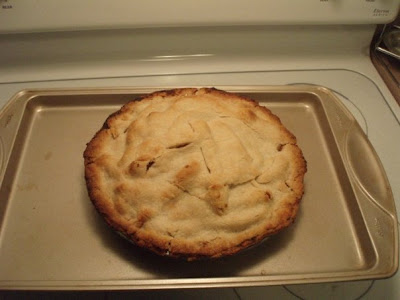 i'm sure it was very tasty.

more recently, I had a giant zucchini from a co-worker's garden. i made TWO things out of it: Zucchini brownies and zucchini pineapple muffins! the brownies were amazing because there were no eggs, and i think very little oil. i left the zuke in the food processor too long, and instead of being shredded, it was pureed. but that made the brownie batter easier to pour into the pan. (if you look at the recipe, i left off the frosting.) The zucchini muffins were very moist too; i made them with mostly wheat flour, and half applesauce, half oil. i still have some of them left. I recommend keeping baked goods with fresh ingredients in the fridge, otherwise if left on the counter, they will get moldy (or just stinky) really fast. (in my blogger profile pic, i believe i'm holding up the raspberry chocolate cupcakes i made for a friend's bachelorette party. i brought the extras to work on Monday. By Tuesday or Wednesday, the smell of them made me want to puke. Amanda almost ate one that day. scary but true!) 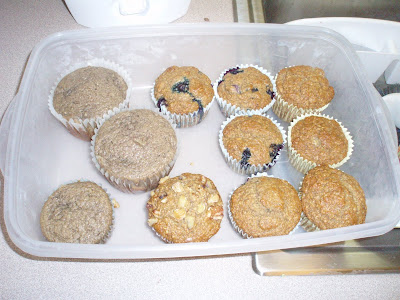 the zuke muffins are on the left. they look really pale and slightly green in certain light, but definitely not moldy. i hope. a jumbo muffin makes a good breakfast (and is about 4 WW points).
also featured in that picture are some banana bran muffins i made this weekend! some have walnuts, some have blueberries (and some have nothing at all!). i made a half-batch to see how they would taste with my modifications: pineapple juice instead of orange; 1/4 c. applesauce and 1 tbsp oil... i don't remember what else i changed. I put way too many blueberries in. there's more berry than muffin in some. but otherwise, a successful muffin. they bleed their own blue blood.

Hungry Girl Recipe! it's amazingly easy: chocolate cake mix (18 oz box) and pure pumpkin (15 oz). mix. spread in greased pan. cook for a while. tada! brownies. (and a doggie who wants one.) 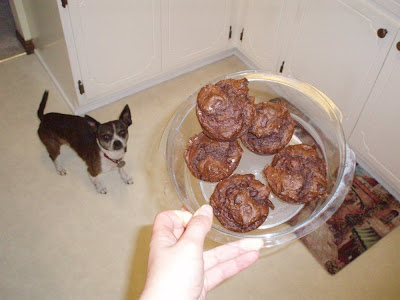 I first made this for our Fourth of July weekend at the lake. This time i used up some left over cake mix to make them into cupcake brownies. and i shall eat them all.

the REAL experiment was Banana Brownies. i merged the zucchini brownies recipe with another recipe i found online. and tried to make them healthy.
they look pretty standard... 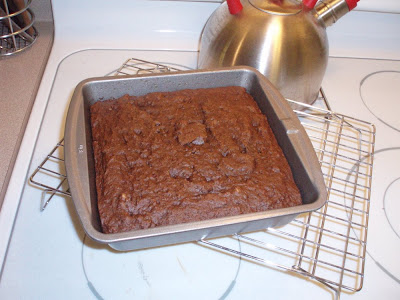 and people have eaten them and not thrown up/died. i used wheat flour, and i probably shouldn't have. they don't taste sweet enough to me.

i think i'll give muffins a rest for a while, then try some other variations... ideas?

oh my, where has the time gone? it's been nearly 2 weeks since i last posted, so what's been keeping me so busy?? Well duh! It's my favorite and craziest 11 days of the year, the Fringe Festival! It is definitely a hobby that I would classify under the larger heading of Theater-going as a hobby.
What is it? Fringe festivals have been around for a while and come from the UK mostly, but they have a big following in North America. this year the MN Fringe had 162 shows, each about an hour long, each performed about 5 times over the 11 days. every performer/theater group who wants to be in the festival gets entered in the Fringe Lottery in the spring and they are randomly selected. there is no jury process to decide who is the best (although sometimes i wish there was, just to get rid of some horrible shows).
How long have I been Fringing? (that's totally a verb, btw. it's also kind of a state of mind...) I believe i first went to some shows in 2005; at least i still have the buttons going back till then. each year i try to go to more shows than the previous year. last year set a very high goal: 19 shows. however, I've seen 18 already, and i'm going to at least 2 tomorrow, so i DID IT!
Why? well why not? it's fun! it's the cheapest way to see a huge range of theater in the shortest amount of time. it's crazy, and it creates a sense of community. This year i decided to volunteer so i'd legitimately earn my free admittance to shows (last year my friend Spencer volunteered a ton so i mooched of of his punch card). I had to buy a punch card too though. And now i feel like i have a right to mingle with the actors and other really involved people at Fringe Central (known the rest of the year as Bedlam Theater in the West Bank). i hung out with Spencer and his girlfriend there last saturday, and we got to talk to 2 of our favorite performers. last night, i hung out with Amanda K and some new people, and we had a great time at the retro dance party, even though it was pouring rain outside. these are ARTSY people, people. they don't care what you wear or how you dance (or how you smell). these are the kinds of people i want to hang out with, if i am forced to do so.
What do I need to know if I, too, wish to fringe? I'm glad you asked! Here's my "survival guide."
1. YOU MUST BUY AND WEAR YOUR BUTTON. it's cute. you can get discounts to shows throughout the year. it's how they make any money!
2. The box office opens 30 mins before the show starts. Buy a 5- or 10-punch card and share it with a friend to save on multiple shows. Go to the BO to redeem your punch for a ticket (or buy a single ticket). People in the rush line (volunteers and performers) get tickets starting 10 minutes before the show. 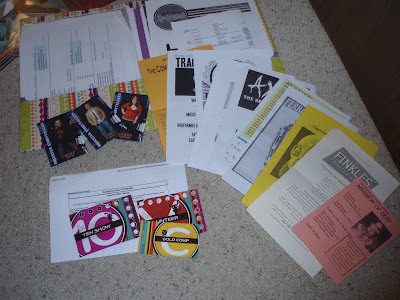 (used punch cards, trading cards i've collected from Rockstar Storytellers, and show programs so i can remember what i've seen!)
3. some shows are popular and sell out! you can reserve a seat for $1 by going online or calling the number. i'm not going to tell you how to do that.
4. you need some form of speedy transportation if you are going to see back-to-back shows which happen to be in different parts of the city. I recommend seeing a bunch of shows in one area on one day, then shows else where on another. the West Bank is were most of the action is; i've been parking my car at Bedlam the riding my bike (which i brought from home on Day 1 and left in the parking lot all week) to Rarig at the U of M where there are 4 stages, or Mixed Blood, Augsburg (2 stages), Southern, and Playwrights' Center. I saw two shows in Uptown (at Bryant Lake Bowl and Intermedia arts) and made it back just in time for my next shows.
5. Bring something to do! below shows the typical contents of my bookbag: simple knitting project; Book; fringe program; show postcards; bookbag with past buttons (one fell off in the car); ticket stubs; and my constantly revised schedule. 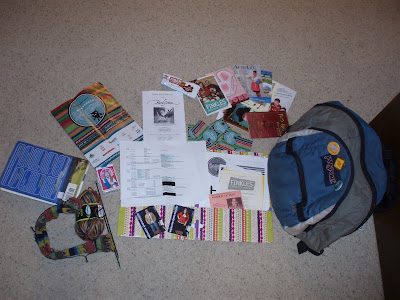 the only drawback to fringing is you never get enough sleep! but who needs it. next year i'm going to try to be a house manager and take the whole time off from work so i can stay up late every night and sleep late every morning! 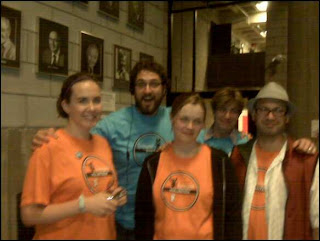 (me, volunteering on Friday, with super-fake-smile Spencer, Kristin, volunteer coordinator/performer Allegra, and Peter. i'm holding a hold puncher! most important tool of the trade.)
Posted by michelleshobbybloggy at 9:44 PM 1 comment: