okay, not really. actually day 14 was 3 days ago...maybe i didn't change my eating enough to make a difference. maybe the contents of the pills didn't do anything for me. so i don't know. my advice: if you want a real cleanse, do a good one, and really go for it. maybe take a vacation at the same time, or go to a retreat/spa. don't just take some pills and expect miracles! (I was not expecting miracles.)

My 5k is 9 days away...must start running every day! I ran yesterday when i got up (6:40 to 7:10 am)...then had mexican (and 2 sangrias) for supper. today, chinese for lunch! already had second breakfast (fruit and a cookie at 9:30). so i'm going to have a lot of cals to burn off tonight!
Posted by michelleshobbybloggy at 8:29 AM No comments:

I'm totally behind on the blogging, and i apologize to the 2 people reading this. But after day 3, nothing very interesting happened in terms of the cleanse...and my life was pretty busy, so that was good. But the business led to some not-so-great-for-cleansing eating. But let's re-cap the weekend, shall we?

Friday I met my friend Spencer at the Witch Hat Tower in Prospect Park (famous for apparently inspiring Bob Dylan to write "all along the watch tower"--i only know that as a Hendrix song, however). The neighborhood was having a festival/fundraiser, and this is the only day of the year you can actually walk to the top of the tower (it used to be a water tower). So after waiting in line for approximately 45 mins, and growing hungry, we took the skinny, twisty stairs to the top and took some pics of Minneapolis, St. Paul, and surrounding areas. I could almost see to my house! well, not really, but I could see the Quarry.

Then we went to the festival part and I ate corn on the cob, two cream cheese wontons, and a plate of cake and ice cream! I wanted a root beer float, but they were out of root beer! :( so I settled with chocolate cake, so awful. But the evening involved a fair amount of walking (or at least standing around), so I got in my low-impact exercise. (no photos because I forgot my camera and spence hasn't posted any.)

Saturday was the AHA Heart Walk! I've been fundraising and planning for this event since March. the "walk" was 3 miles around downtown Minneapolis and the lovely warehouse district. Here's my sister and I: 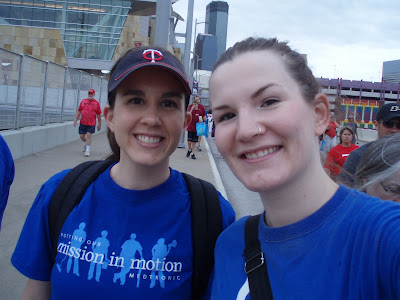 The opening events were at Target Field, so it was fun to wander through areas I didn't see when I went to a game, like the exclusive "champion's club" right behind home plate.

After the Walk, and in the rain, we went to my co-worker Tim's house for a BBQ with our team and his family. so i ate a delicious cheeseburger...lots of pasta salad...half of a hot dog...a few sips of wine...some of the rhubarb bars I made...chips....afterward, my tummy felt stretched to the limit. but then I went home and sat on the couch (and watched the second disc of Party Down, season one).

Sunday I walked even MORE! at Grand Old Day, on Grand Ave in St. Paul. I hung out with my friend and co-worker Amanda K as we looked at the booths and watched bands. and ate things like Pizza Luce and mini donuts! 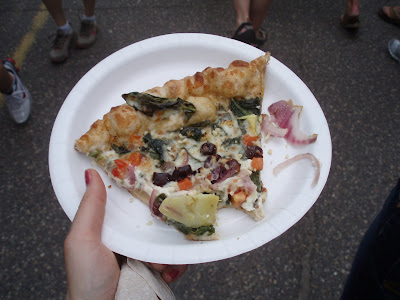 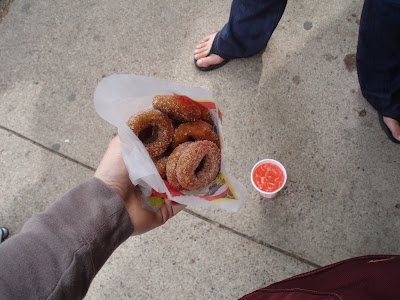 and we may have ended up with free deep fried s'mores on a stick... not surprisingly, it was also delicious. quite messy though.

Let's also make this a BAKING post! Check my recipe for Rhubarb Walnut Bars. I started with someone's recipe for Almond Rhubarb Coffee Cake, and made it BETTER! 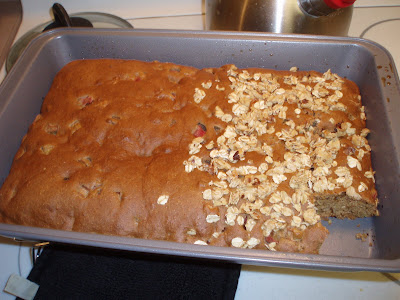 everyone who had one said they were good! (i wasn't sure how the oatmeal topping would turn out, so I only put it on half.

So, on day 8 of the cleanse, I start taking a Milk Thistle capsule in the morning, 2 at night, and fewer laxatives at night. I don't feel different yet...I'm kinda tired but that's probably because I was up until midnight and it was rainy all day, which doesn't inspire perkiness. but on to week 2!
Posted by michelleshobbybloggy at 5:43 PM 2 comments:

This afternoon I got really tired. I don't know if I can attribute that to the cleanse, although the materials do say to take it easy, in terms of exercise, so as to not overstrain yourself, or something. I got the usual amount of sleep last night and wasn't overly sluggish in the morning, but I did do a lot of walking around at work today. So I don't know! i didn't exercise even though I brought my clothes to work; after walking the dog, i watched the news, then took a nap on the couch. I was awoken by my phone ringing at 7:50, but it was an unknown number. which was annoying, but i didn't need to sleep any longer anyway! So i'm going to bed at 10:30 tonight. I hope, if it rains, that it doesn't thunder too much.
In other notable news, i was reading on the FAQs that you can cut back on the Fiber capsules if things aren't...moving very quickly. considering 8 of the caps are 16% of your DV of fiber, and i get plenty every day (such as from my new favorite gnu "Fiber and Flavor" bars, 48% DV), i didn't take the 4 fiber caps tonight, just the 3 lax and 1 milk thistle. so we'll see if that makes any difference.
Saturday is the Heart Walk...hopefully I am feeling more energetic by then! Tomorrow night I want to go climb the Witch Hat Tower, then I need to go to the grocery store and make something for our post-walk BBQ (walnut rhubarb coffee cake, never made it before) and get a good night's sleep! We have to be at Target Field by 8:20 for a team picture.
Posted by michelleshobbybloggy at 8:11 PM No comments:

Not too much to report. things seem to be status quo. and you don't really need to know what that entails. I was planning on going to yoga at 7:30, but it was so nice out I decided to celebrate National Running Day (as I'm told is June 2). but then i settled in on the couch...watched the season finale of "Kendra" and then ate soup and crackers for supper while watching "Top Gear"...then at 8:30 I figured if I was going to run, i needed to get out before it got dark. i took a new route and got a little lost which resulted going farther than I had originally planned. halfway through I regretted eating supper before running...so i walked the rest of the way (except running across Lexington so I wouldn't have to wait for the next green light) to prevent any...accidents.
so that's all for now! maybe i'll exist on only lemon juice, cayenne pepper, and honey for a day, just for fun, to really kick the cleanse into high-gear. and then probably pass out walking to the bathroom or something.
Posted by michelleshobbybloggy at 8:32 PM No comments:

I've only taken the 4 Fiber caps so far. they were tasty! 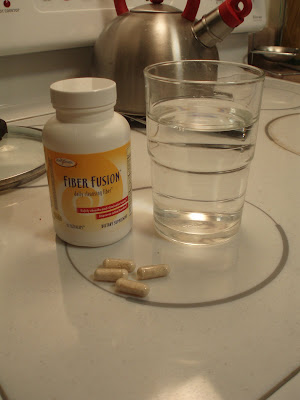 Relatively small morning dose, and the big glass of water.
let's record what i ate today:
breakfast: smoothie (strawberries, raspberries, banana, OJ, vanilla yogurt, little bit of canola oil) and a small banana muffin
lunch: lentil-tofu soup with golden corn vitatop and a small jell-o fruit cup. and some veggies from the Carrot Club Cube (that i brought, so of course i liked the selection). and a 100-cal pack of cocoa-covered almonds.
snack: Fruit (blueberries, blackberries, melon, pineapple) and two glasses of sparkling grape juice (i did not have cake though!) at my boss's surprise "you've been promoted to director!" party. and i had a piece of dark chocolate when i got back upstairs...
late snack/early supper at 4:20: fiber one bar
before softball: a few pickled mushrooms and a popsicle
after softball: two slices of pear-cheese bread and some cherry tomatoes
is that all? hmm, i didn't feel the urge to constantly eat today! I really think it's a monthly thing. I bet i've consumed twice my daily recommended amount of fiber. I think this "cleanse" just makes you constipated then gives you diarrhea.
Oh, also, for the record, i got up at 6:30 and went for a 20 minute run then 10 mins of sit-ups and stretching. and I played softball.
i'm kind of excited to take the bedtime pills and see how they affect me. now i shall walk the dog, take a shower, then take the pills and settle in to bed for some reading. 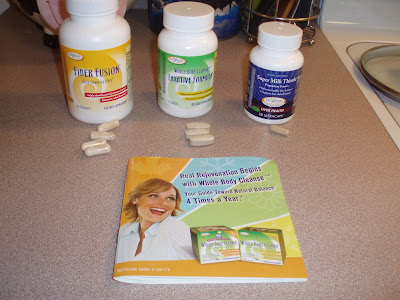 8 pills, and another big glass of water! I need 8 oz. just to swallow all of these. the lady on the booklet sure looks happy. "best poops of my life!" i bet that's what she's thinking.
Posted by michelleshobbybloggy at 7:24 PM 2 comments: