I am the organizer of, I admit, a lot of knitting and crocheting (or other crafting) events. But some I just attend! Over the past few months, my circle of friends has taken turns hosting Craft Day at our houses on weekend afternoons. In January, Karyn had us over to her house, because she had a TON of yarn and supplies from her grandma who had recently passed away. So we jumped in and claimed our favorite colors! 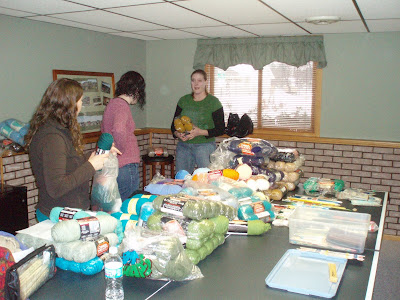 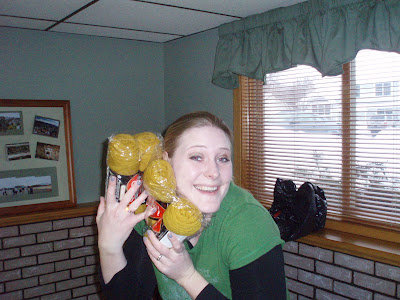 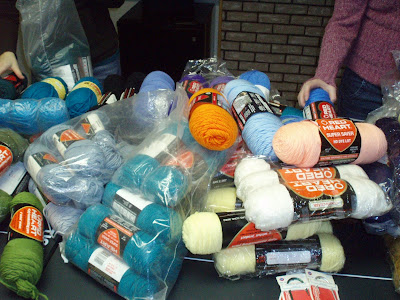 I looked through all the books and claimed some quilting/crafting ones for my mom, and crocheting patterns for myself. We thought this was the BEST book title and cover ever: 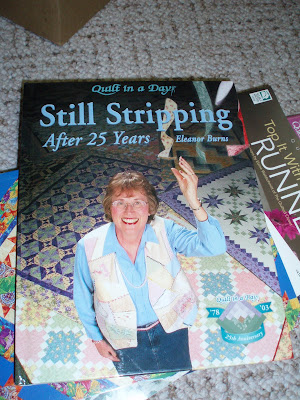 Oh yeah, take it off, Eleanor! I saw this on DVD at Joann's the other day; might be up to 35 years now.

Karyn asked me to help her come up with a border to an afghan that wasn't quite finished yet. First I had to teach her to crochet though! 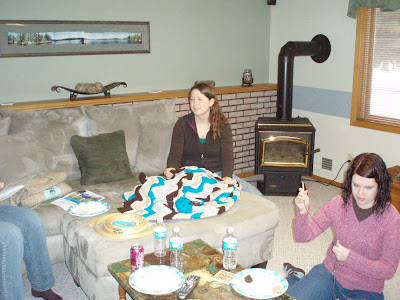 In February (on V-day, actually) Rhiannon and I met up with our friend Andrea (who is in grad school at the U; her husband lives in Delaware so we were her stand-in valentines) in the afternoon at Anodyne Cafe in Minneapolis. I forgot to take pictures! They have a Community Knit project: someone supplies the yarn and leaves it in the lounge area and people work on it in whatever pattern they wish. The results are mixed (don't mix ribbing with nonribbing!).

On Feb. 27 I went to the Knit with the MN RollerGirls event at Crafty Planet in Minneapolis. They supply yarn for people to make hats, which they donate to hospitals to give to chemo patients. I took my project home with me, so I need to get it back to Crafty Planet soon! My coworker/volleyball teammate/crocheter extraordinare/rollergirl groupie Roberta was there too, and 3 roller girls and the referee Ump, who seems to be more obsessed with knitting than a lot of people I've met. He bikes and rides the bus as his modes of transportation, and the bag he uses is designed to carry all his knitting needles. we were impressed.

March craft day was at Rhi's house, and only Amanda and I attended, but that just meant there was more delicious snacks for us, and less squabbling over the music to listen to on her new turntable system! 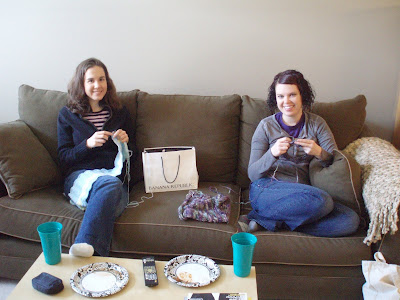 Plugging away on my baby afghan, while Rhi reknits a cowel-neck thing.

Amanda finished up her bright orange scarf (made from Karyn's yarn!) and I showed her how to add tassles. She's going to send it in to Project Warm Hearts, which if I haven't explained yet, I will now... 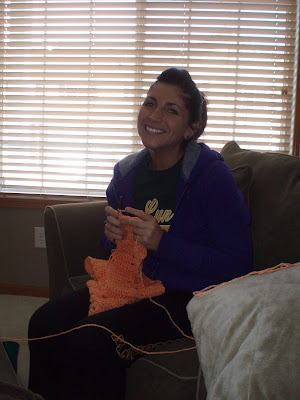 We also knit and crochet at work! a couple of years ago, one of my coworkers wanted to learn to knit, and another coworker wanted to get back into knitting, so the three of us starting knitting over lunch every so often. Then more people got wind of it (at first it was just tech comm and regulatory), and we had to move to a bigger conference room! About a year about we all moved to a new building (Medtronic campus in Mounds View, which has 3000-4000 people; the old building had 150), and I invited everyone involved in Project Warm Hearts to come to these bi-weekly lunches. PWH is a volunteer opportunity that was started years ago (not sure how many) by an employee; she collects all the things people make (hats, scarfs, mittens, afghans, clothes, washcloths, dishtowels) and donates them to 3 organizations in the Twin Cities: Bridging, Alexandra House, and Children's Home Society. Every item we donate is worth a certain amount, because the Medtronic Foundation donates a matching cash amount to those orgs as well. So they get free blankets and things to keep people warm, AND they get money to pay for their operating costs! How cool is that? What I also like is each spring they have a luncheon and everyone who donates items gets invited to see a huge pile of the stuff (and say "this is cool, i want to make one!"), hear a representative from one of the three orgs speak, and we get to pick up some free yarn to create stuff for next year!
Anyway, I'm still working on my afghan; I'm on the second yellow section though! 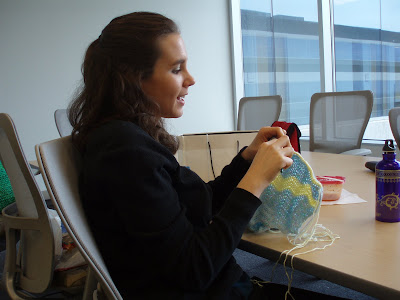 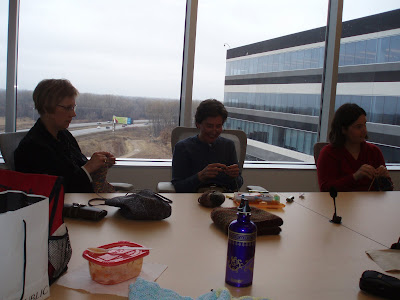 Tina, I think is her name, works on giant mittens (she's going to felt them) and Roberta (as mentioned above) starts a hat. 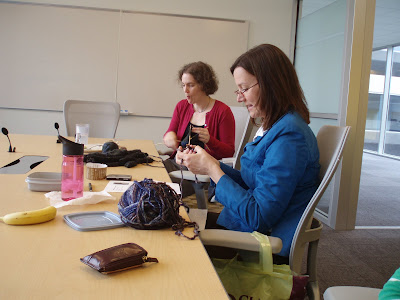 First-time attendee Ann wowed us with her plastic yarn ("plarn") made from grocery sacks that she crochets into totes. Here's a pattern. 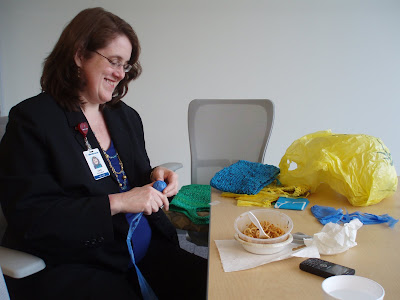 I've been meaning to post this since Sunday, but during the week I usually don't want to do anything at home that involves this much typing. And I'm super-busy at work, so no time for secret blogging. barely a second to tweet! what is the world coming to?? But i've promised myself ice cream after i get this posted, so that's a big incentive.

On Sunday I made a big crock pot full of chili as my meals for the coming week. or 2 weeks, in this case. The recipe was a combo of the chili my friend Jen made when we were roommates, and recipe I got at a WW meeting once. I call it, Michelle's Chili! 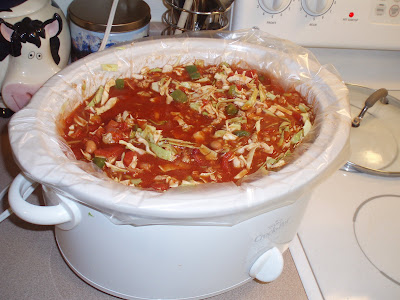 Ingredients:
1.25 lb ground turkey (because that's how much comes in the Jennie-o package; you could use more or less)
1 medium onion (any color), chopped
1 green bell pepper, chopped
1/2 tbsp of minced garlic (or 1 clove)
3 14.5 oz cans of diced tomatoes (one of the cans i used had green chilis, you can use that kind if you want)
1 can of pinto beans (drain the sauce)
1 can of kidney beans
1 pound of chopped cabbage (i used half of a large head of green cabbage, but purple is good too)
46 oz bottle of V8 juice (i used the reduced sodium kind)
2 tsp chili powder

Brown the turkey in a skillet. add the onions, green peppers, and garlic; cook a bit. Add 1 tsp of chili powder.
Move the contents of skillet to large crockpot with tomatoes, beans, V8, cabbage, and 1 tsp of chili powder. Add more chili powder if it's not spicy enough; add salt and pepper to taste.
Cook on high for 3-4 hours, or low for however long you want. (I ate my supper on sunday night after it had cooked for 2.5 hours, but the cabbage was still kinda...firm. so i let it go for another couple of hours--actually i forgot about it while i watched the Oscars--and then onions and cabbage were satisfactorily mushy. The cabbage doesn't add any flavor, just fiber and bulk!)
I divided it into about 10 2-cup servings. I put it in WW recipe builder and got 4 points per serving with 9 or 10 servings. If you are veg-only, leave out the turkey and double the beans. Does anyone know of a meat substitute that would be acceptable? the Boca soy crumbles i put in my lasagna would not work in chili (texture is all wrong). 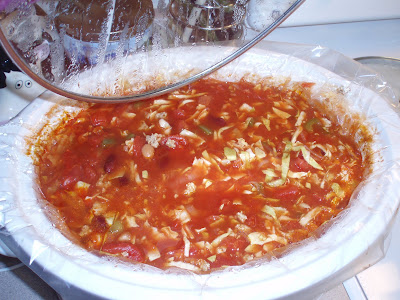 On Thursday I made up my Golden Corn Vitamuffins and ate two with the reheated chili (also what i had for lunch on Friday!). As a kid i kinda hated the corn bread my mom made; but as an adult, i've changed my mind, and Vitatops are part of the reason! You can probably get the GoldenCorn Vitatops in the freezer at your grocery store. 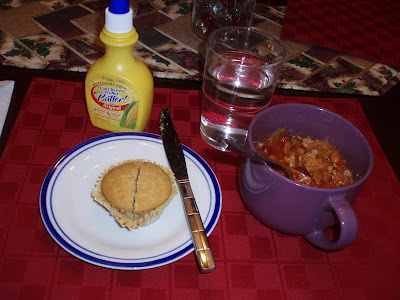 Posted by michelleshobbybloggy at 6:19 PM No comments: