oy, what a month. actually, more like a month and a half. I've stopped attempting to take pictures a concerts because I'm never sure if cameras are going to be banned, plus Rhiannon's camera takes much better pictures anyway. So I'll bum hers and others taken by journalists.

Wednesday, September 22: Arcade Fire at Roy Wilkins. I wish I had seen AF before they were big. I'd like to see them up-close. Far away was pretty impressive too; they filled up the entire stage with a 8-member band and very impressive set pieces and background images.
Photo album from City Pages Gimme Noise

Thursday, September 23: Of Montreal and Janelle Monae. We were prepared this time. OM's Kevin Barnes enjoys a unique stage presence. It's always a spectacle. Rhi's photos. 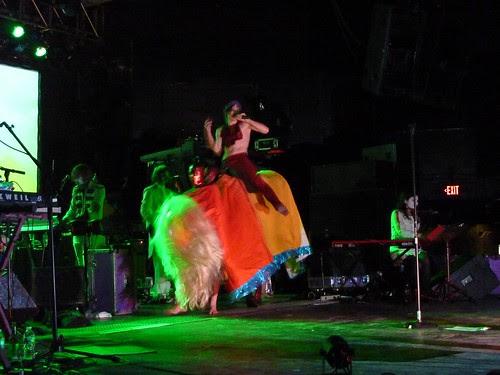 Saturday, October 16: Sufjan Stevens at the Orpheum. Oh Suf. how i love thee. I also loved the opinions of this show. This was my favorite show of the month.

Thursday, October 21: Rock of Ages at the Orpheum: this musical features a ton of 80s music. I've had a lot of the songs stuck in my head since then. It was a pretty good show. Rhi and Amanda B are in love with Constantine now.


Friday, October 22: Phantogram at Fine Line. night out with the girls! First it was dinner at Thom Pham's new Wondrous Azian with my sis, rhi, and karyn. Krista and Margot met up with us later. The show was pretty good, although the band had a lot of things working against them: Any serious TC concert-goer hates the Fine Line. the layout sucks (the bar is too close to the main floor; to get from backstage to the stage you have to walk across the path to the bathroom; the door to the smoking patio is right by the stage) and they cram way too many people in there. and then the people won't shut up, and don't respect anyone's personal space. I concluded I hadn't seen a show there since Cold War Kids in October 2008, and I didn't miss it. (at that show, the crowd had no respect for the opener, AA Bondy, who I admit was probably a mismatch to open for CWK, but the crowd could have at least stopped talking when he was singing!) Another strike against the Fine Line: the bartender who provided Karyn with a Whiskey and grapefruit instead whiskey and ginger ale. But back to the show. It was okay. as expected for a band with only one album.
Calendar article from City Pages

Saturday, October 23: LCD Soundsystem and Hot Chip at Roy Wilkins. All the indie hipsters were a twitter over this one, the biggest dance party in town. Rhi and I were very happy to have balcony seats though (this being one of the reasons). She left a few songs before it ended; i went home after the last song (i was very tired). but the musicians themselves make the trip across down for a DJ set at First Ave during Too Much Love. That would have been so cool to have been at the dance night, and then one of the most famous DJs/musicians in the country/western world shows up. and i just gotta say, if you saw James Murphy walking down the street, you would not guess he's a musician in any sense of the word. He looks more like an IT guy/engineer.
Review from TC Daily Planet
Star Trib Artcetera write up (even Riemenschneider enjoyed it!)
Photo album from City Pages Gimme Noise
James' Theft of the Dial on the Current (I haven't listened to it)
Hot Chip's In Studio at the Current (listening to it now; I love them live, saw them at First Ave in 2008)

Wednesday, October 27: I couldn't miss Stars at First Ave, so I went by myself. the crowd seemed rather mature and subdued, which normally I would love, but I felt like they weren't giving the band any energy. Still, I liked hearing my favorite songs live. and the bubbles.

Friday, October 29: Mumford and Sons at First Ave. I think i'm alone amongst my group in finding the opener King Charles to be amusing; I like a little weird. second opener Cadillac Sky played their strings to the fullest in a perfectly short set. Then Mumford played their hits, with some technical difficulties; i enjoy a show that isn't a duplication of every other show on the tour. we got to hear a very quiet acoustic cover with some of the members of Cadillac Sky, and all musicians performing that night came together for the encore.
Photo album from City Pages
Review from TC Daily Planet
In-studio at the Current from May that Rhi and I went to (and we were very happy to, since their show at the Varsity unexpectedly sold out)
Posted by michelleshobbybloggy at 11:03 AM 1 comment: