It was a pretty good year for music. Here we go.
1. It came out in 2011, but the album I listened to the most in 2012 was definitely AWOLNATION's Megalithic Symphony. It started with "Sail," then "Kill Your Heroes," then "Burn It Down," then "Jump On your Shoulders"... love them all. I saw them at the Varsity this year. It was a sold out show, but obviously more people were there to see Imagine Dragons, who have a few radio hits, but i see them more as a pop-rock band. So anyway. check out AWOLNATION.

2. Purity Ring: Shrines. Still kicking myself for not getting to the Dirty Projectors show early enough to see them.

the rest, in no particular order:
-Alex Clare: The Lateness of the Hour
-Twin Shadow: Confess (I think i saw them at the Triple Rock after their first album)
-alt-J: An Awesome Wave (tickets purchased to see them on April 1, 2013!)
-Grimes: Visions
-Solid Gold: Eat Your Young

Songs:
-Atlas Genius: "Trojans" and "Symptoms" (saw them open for Silversun Pickups)
-Django Django: "Default" (will probably see them at 1st ave in March, if Rhiannon got tickets!)
-2:54: "You're Early"
-Perfume Genius: "Dark Parts" (wanted to see him when he came to MN, but i didn't)
-Yeasayer: "Henrietta"
-the xx: "Chained"
-Japandroids: "The house that heaven built"
-Wolf Gang: "Back to Back" (won tickets to see them at the Varsity. it was a pretty good show. the lead singer was not as i'd pictured.)
-Temper Trap: "Trembling Hands"
-the fact that there's a song called "Quesadilla" on Walk the Moon's album
Spotify playlist of these songs
According to Last.fm, the artists i scrobbled the most (from iTunes, my iPod, and Spotify) in the past 12 months (below). I listen to a lot of Sufjan in general, moreso now that he put out another Christmas compilation! 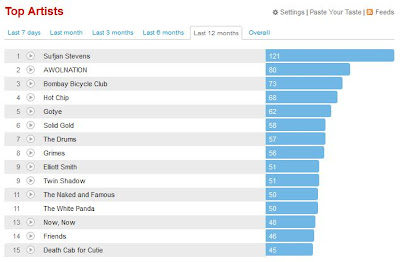 Posted by michelleshobbybloggy at 8:11 PM No comments: