By "baseball" I of course mean watching baseball, not playing. I did play softball for a few seasons as a kid and intramurally in college, but I'm pretty bad. Also talking about baseball, and thinking about baseball...and fantasy baseball.
How long has watching baseball been a hobby? When my family lived in Atlanta (birth to age eight), we went to Braves games at Fulton county stadium. My dad's company (Scientific Atlanta; they got bought by Cisco a few years ago) had tickets behind the home dugout, and he got the tickets from time to time. I probably went to 2 or 3 games. I remember being terrified of the mascot as it danced on the dugout roof (I hid under my seat; i did this at Chucky Cheese too. I did not like large furry human-animal hybrids as a kid. I didn't like dogs either; once I grew up, I got over these fears.) The 90s were a good decade for the Braves (except for 1991, when the Braves played the Twins in the World Series, and we had just moved to South Dakota), and most of the games aired on TBS, so I followed them during the Chipper/Andruw years. (the fact that Andruw is now a mediocre player for the White Sox blows my mind!) Moving to Minnesota in 2001 meant I kind of had to become a Twins fan, and I didn't really mind.
Why do I like watching baseball? Well, it's the only sport I fully understand. The rule aren't tricky, there aren't many "plays" like in football or hockey (hit-and-run and bunting are about the extent of that), and it moves at a fairly slow pace. If I'm at the game, I can keep score or knit a scarf. If I'm at home, it's easy to do something else while watching the game and not miss anything. I'm watching the Twins/Royals game right now! (Alternate reality moment: If we had moved from Georgia to Kansas/western Missouri, I'm not sure I would have become a Royals fan. They are usually 4th or 5th in the division and I can't devote myself to constant sorrow and misery.) However, when something exciting happens, it's really exciting. A hit is good; a home run is better; a grand slam is AMAZING. They're going to replay that action on Sports Center. There are 162 games a year, so prices are cheap, and you have enough time to get to know an entire team and talk about them like a stat head. On the other hand, i wish the season was a month shorter; start 2 weeks later in April and end mid-Sept so that the playoffs don't last until early November. that's just TOO MUCH BASEBALL, especially if you watch spring training games!

I like baseball so much, I didn't mind the Metrodome! Yeah, it smelled like stale beer and hot dogs, but it was cheap, and it was close to cheap parking. It was climate-controlled. I went to many games there. I got to use the Medtronic suite a handful of times (it got to the point that they sometimes couldn't give away the tickets for free!), which was cramped but at least close to home plate. Here's the view of home plate from the suite: 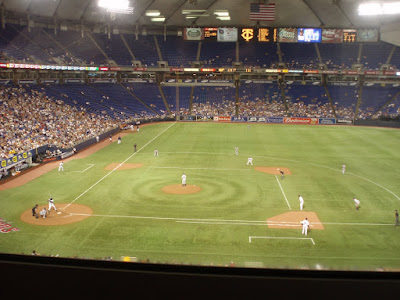 Rhiannon (i don't like any of the pics of me from this game) and a full shot of the lovely roof: 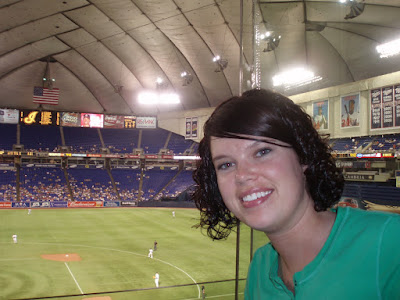 I've been to ball games at a few other major league ballparks: Wrigley Field (on a family summer vacation, mid-90s I'd say), Coors Field (another family vaca), and Miller Field in Milwaukee. Here's a couple of pictures from that trip in Sept. 2007. 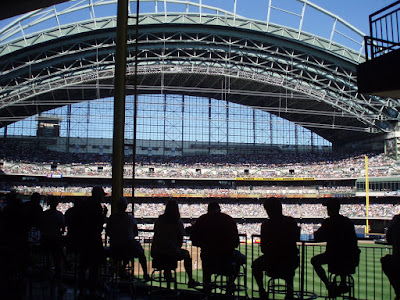 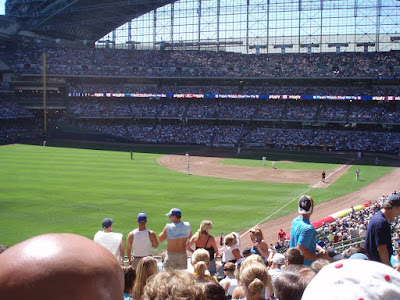 I was pretty impressed by that stadium, although anything after the Metrodome is seems great. My one fault was our seats were in the sun the entire game and I thought I was going to die of heatstroke. I spent half of the game in the cool shade of the concourse.
But now... now. NOW IS THE TIME FOR BASEBALL IN MINNESOTA! Target Field is all the synonyms you can think of for "amazing." I'm pretty sure it's the most photographed structure in Minnesota right now, by pros and regular joes alike. here's a few pics from the first night game of 2010, April 16. (Twins beat the Royals, 10-3.) 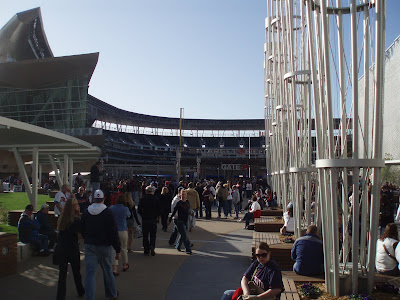 Target Plaza, the entrance from downtown. 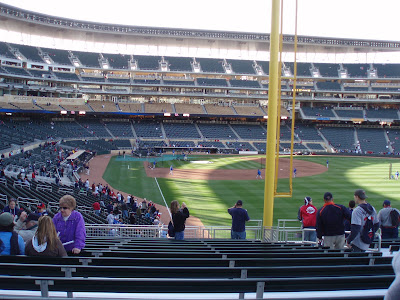 View from above the right field bleachers, inside Gate 34. 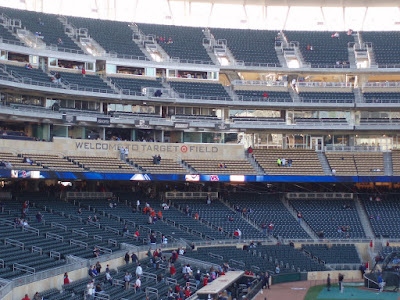 Zoom-in on seats behind home plate; the press box is above the "Welcome to Target Field", which is the club level; above that are the suites, or maybe the other way around. I don't know, we didn't go up there! 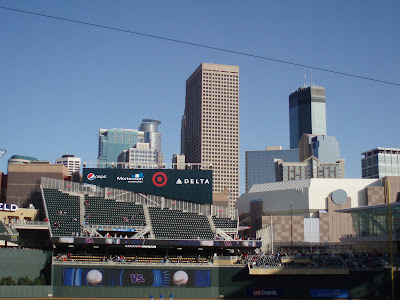 View of the Target Center and Downtown from left field seats. 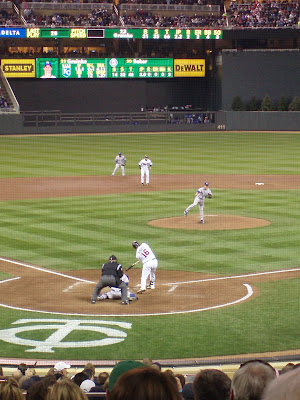 Oh yeah, there was a game played too! Here you can see that Kubel went too far, and struck out!

So that's my tribute to baseball. I'll probably have more ballpark pics in a month!
Posted by michelleshobbybloggy at 5:54 PM No comments:

It has been too long since i've posted! what should I write about next, fickle followers?
Posted by michelleshobbybloggy at 11:15 AM 1 comment: